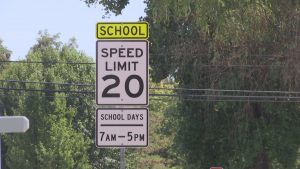 MEDFORD, Ore. — Students will head back to school in Medford next week, which means police will be watching school zones, bus stops and crosswalks.

The Medford Police Department said with the nicer weather in the morning, more kids are going to be out walking to school.

Speeds are reduced to 20 miles per hour in all school zones, most are in effect from 7 a.m. to 5 p.m. on school days or whenever kids are present.

For school buses, drivers are required to stop for all school buses stopped with flashing red warning lights, even if you’re driving in the opposite direction. The only exception is when there’s a full physical barrier separating the two sides of the street.

If you’re caught speeding in a school zone the fine doubles, meaning you could pay anywhere between $220 and $870 per ticket depending on how fast you’re going.