Governor Brown sent a letter to the members of the Oregon Racing Commission on Wednesday, reiterating the Oregon Department of Justice’s opinion on the legality of the pending HHR machines. The opinion stated that the Flying Lark would operate as an illegal casino, and advised the commission to not authorize the machines.

“It is my expectation that the Oregon Racing Commission will heed the advice in this published  opinion by our state legal counsel,” Governor Brown said in the letter. ” Where, as here, an application before a state regulatory licensing agency proposes unconstitutional activity, that application should be denied.”

Months prior, Governor Brown paused the commission of approving the HHR application, until it received the opinion from the DOJ – which was released on February 11th. In the letter sent out five days later, the governor made note of disciplinary action if the commissioners went against the state. 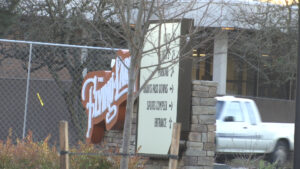 “As dedicated public servants, I know you all appreciate the significance of following the law.  If members of the Commission vote to take any action inconsistent with the law, as interpreted  by the Oregon Department of Justice, I would regard such conduct as contrary to my  expectations for your appointment. This could provide grounds to initiate removal from the  appointment as provided under the cause standard identified in ORS 462.230.”  said Governor Brown.

The ORC then voted unanimously to deny the application, while also voting in favor of sending a statement of its disapproval to the DOJ. 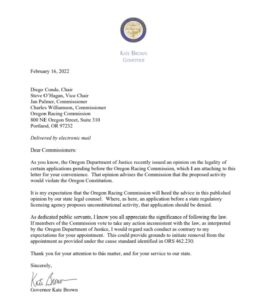 “Casinos have roulette wheels, craps tables, black jack, lottery drawings and the Flying Lark has none of these,” said ORC Commissioner Charles Williamson.

As for the Flying Lark, Boersma shared during the meeting that he plans to personally fund this year’s horse racing events, despite not being granted the machines. However, he acknowledged that hundreds of people will be without a job by the end of the month.