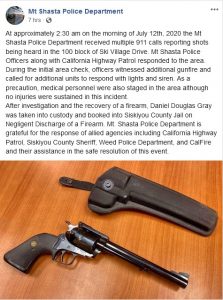 Mount Shasta PD says it responded to the 100 block of Ski Village Drive after receiving multiple phone calls about shots being fired.

It says after investigation, it recovered a firearm belonging to Daniel Douglas Gray.

“As they arrived and were starting to investigate, additional shots came out and they were un-certain of where they were coming from or where they were going to. It was determined that one subject was on the back porch and firing indiscriminately,” said Mt. Shasta PD Lieutenant Joe Restine.

Gray was arrested and booked into Siskiyou County Jail on negligent discharge of a firearm.