SALEM, Ore — Senate Representatives are preparing to introduce new legislation which would send money to Black Oregonians that are descendants of slaves.

“African Americans that were previously slaves, built this land and the economy… and have received nothing but misery for labor,” Democratic District Seven State Senator James Manning Jr. who is co-sponsoring the bill told NBC5. “This bill is asking [Legislature] to come up with a plan to provide reparations to those descendants who have not received anything.

State Senator Lew Frederick is the main sponsor of Senate Joint Memorial 4. A work session on the measure is scheduled for Wednesday, and would allow it to become a bill.  The measure is expected to pass and will move to the senate floor for a vote at a later date.

In the measure shown publicly on the Legislature’s website, it states, “Whereas as a result of historical and continued discrimination, African American descendants of slaves continue to suffer debilitating economic, educational and health hardships, including an unemployment rate more than twice the current white unemployment rate and an average of six
percent of the wealth of white families, a disparity which has worsened, not improved, over time.” 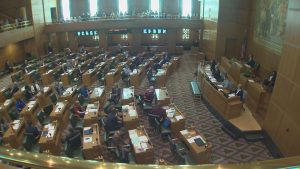 Last week, Evanston, Illinois became the first city in the United States to pay reparations to Black residents. According to the Associated Press, $400,000 will be distributed to eligible Black households. Each household would receive $25,000 for home repairs or down payments on property.

The state’s proposed measure is just one of many introduced in an effort to combat racial injustice following last summer’s unrest.

Senate Bill 398 will make it a crime to display a noose with the intent to intimidate another person or cause harm. It would punish the person(s) with up to a year of imprisonment, a $6,250 fine or both. The bill will be voted on the Senate floor Thursday.