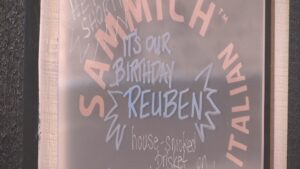 In honor of Sammich’s 8th anniversary, a small celebration party is being thrown.

It has live music and special $8 burgers for purchase.

The founder, Melissa McMillan, says the original store opened in 2013 in Ashland but has expanded with a shop and food truck up in Portland.

“This community built me up and sent me out on my way and they’re always here to support me. It’s really special and means a lot to me,” said McMillan.

McMillan says despite the challenges of the pandemic, Sammich hasn’t furloughed or laid off any of its employees.

She says throughout the pandemic, she hired more staff to help.

You can learn more about the deli on their Facebook page.