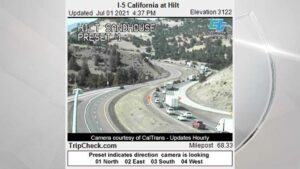 ASHLAND, Ore. – Several issues are impacting traffic on Interstate 5 between Ashland and Redding.

The Oregon Department of Transportation said slowdowns are being caused by wildfire closures, road construction, and holiday travel.

I-5 was temporarily shut down north of Redding Thursday morning due to the Salt Fire burning near north Shasta Lake. While the highway has been reopened, lane restrictions are still in effect.

Highway 97, a route that connects Weed and Klamath Falls, is still completely shut down due to the Tennant Fire, forcing travelers to use I-5 instead.

South of Ashland, a construction project is limiting traffic to a single lane in each direction at several locations over the Siskiyou Pass. ODOT cannot open more lanes due to bridgework.

Travelers are always advised to check http://www.tripcheck.com for Oregon traffic conditions. For California roads, use http://quickmap.dot.ca.gov.