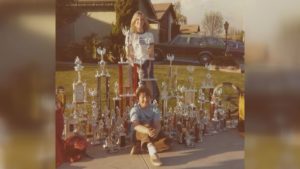 YREKA, Ca. — A northern California woman who was one of the first female athletes to compete in the sport of bicycle motocross in the late 70’s may be added the BMX Hall of Fame.

Leslie Burley-Cobb began her BMX career at age 14 after buying a bike from her neighbor.

In her first competition, which was all boys, she lost every race – but, she says after that moment she was hooked.

A year after coming in last place, Burley-Cobb traveled around the nation racing 4 times a week and won.

“It was really kinda neat to see more and more girls get involved, but I really didn’t comprehend I think, that it was the beginning and we were pioneering the sport for girls,” said Burley-Cobb.

She collected 268 trophies before retiring in 1985.

She is nominated for the BMX Hall of Fame category ‘Influential BMX Woman’.

She says she could find out anytime now if she’s being inducted or not.