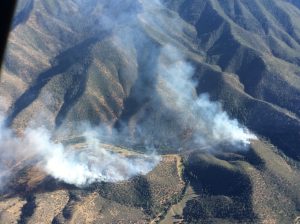 SISKIYOU COUNTY, Cal. – Cal Fire is assisting the U.S. Forest Service – Klamath National Forest Monday night with the Lumgrey Fire. USFS reports the fire is burning 180 acres, with an estimated 30 acres on the south side of the Klamath River.

Officials say the fire started around 6 p.m. as two fires. The two then merged together.  Officials say a Type 3 Incident Management Team will take over the fire Tuesday morning.