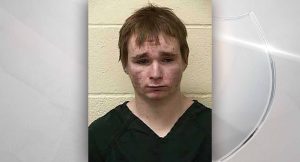 GRANTS PASS, Ore. – A local man was arrested for allegedly having sex with at least one underage girl.

The Grants Pass Department of Public Safety said they were informed that 21-year-old Kenneth “Jay” Sinor was allegedly having sex with multiple 15-year-old girls.

Deputies investigated and found evidence indicating Sinor had sex with at least one 15-year-old girl. It’s believed there are still additional underage teens who had sexual contact with Sinor.

Sinor was arrested on October 17. He’s currently lodged in the Josephine County Jail for rape, sex abuse, and sodomy.

Anyone with further information about this case is asked to call Detective Yerrick at 541-450-6260.