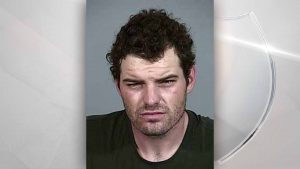 The Mount Shasta Police Department said on October 26, someone broke into the humane society’s building through a back window. Officers responded to the scene just before 8:00 a.m. and found the offices ransacked. Numerous items were stolen including computers, chip scanners, a safe, prescription drugs, hypodermic needles and medical supplies. A narcotic that can be fatal to humans was also missing, a particular concern for officers.

Police said cats were let out of their cages, with two leaving the building. However, they were all later recovered.

During their investigation into the burglary, police received a tip reporting some property matching the description of the stolen items was located in a garage at a home on Wertz Road in Mount Shasta.

Inside the garage, police found 25-year-old Dylan Slade with a considerable amount of the stolen property. Police also found property from inside a vehicle that had been stolen from a vehicle parked nearby.

Slade was arrested on charges of burglary and possession of stolen property.

Investigators believe there could be additional suspects involved. Anyone with information  about this case is asked to call police.