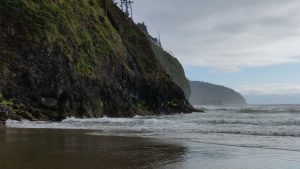 Tillamook County, Ore. – A Corvallis paraglider was killed after a failed launch attempt from a cliff on the Oregon Coast.

According to OSP, at around 4:55 p.m. 53-year-old Clifton W. Westin tried to launch a paraglider from a cliff overlooking the beach, but he fell to the rocks below.

Westin was washed into the ocean by the waves, officers said.

Emergency responders were unable to reach him from shore, so a U.S. Coast Guard helicopter was dispatched along with a motor boat from the Tillamook Bay Station.

OSP said Westin was recovered from the ocean, but he was unresponsive when brought on board the boat.

He was pronounced dead a short time later.