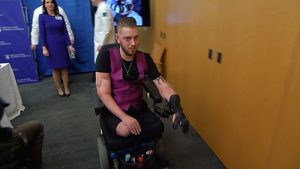 Boston, Mass. (NBC News) — Quadruple amputee John Peck can now hold his fiance’s hand thanks to a double-arm transplant carried out by doctors at Brigham and Women’s hospital.

The retired Marine sergeant became a quadruple amputee six years ago after he stepped on a land mine while serving in Afghanistan.

In August of this year a team of 60 surgeons, nurses and technicians performed the 14-hour surgery, giving him two new arms from an anonymous donor.

Peck is currently undergoing outpatient therapy, working on things such as transferring in and out of his bed and wheelchair, along with every day tasks such as self-dressing, grooming and teeth brushing.

Peck expressed his gratitude to his deceased donor and their family during a press conference.

“Your loved one’s death will not be for nothing.  Every day that I look down at my new arms, I will drive on through the pain and I will never give up.  I will remember his selflessness and his gift until the day I die and I will not take it for granted,” Peck said.