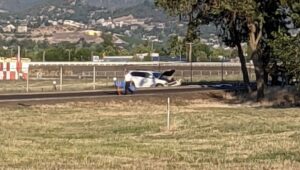 It says a 31-year-old man was driving southbound when he crossed into the northbound lanes and hit an SUV.

The 31-year-old died at the scene, while the driver of the SUV suffered minor injuries.

MPD, the Medford Fire Department and at least one Mercy Flights ambulance were on scene.

Bullock Rd. was closed, as well the intersection of Biddle Rd. and Lawnsdale Rd.

The closed portion of Bullock, from Highway 62 to the airport entrance, is expected to open back up around midnight.

MPD says the crash is still under investigation.