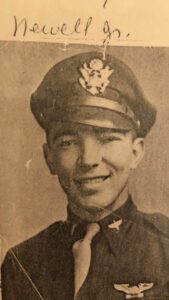 MEDFORD, Ore. —One local woman is finally getting answers, 76 years after a relative disappeared during World War II.

After Pearl Harbor, he signed up to be part of the 355th Division, fighting out of England. On April 7th, 1945 his P-51 Mustang was shot down, in Germany.

She says that’s when his body was mistakenly found, 50 miles away from the crash site and buried in Belgium. But the military contacted Oeland’s family in 2008 and said the person in his grave was not him.

Trisha was in class around a month ago, when she says she got a call from the army, saying they found her uncle’s remains in a mass grave in a small village in Germany.

She was soon contacted by German researchers, looking for missing aviators.

“Told me that he had been working on my uncle’s case for ten years and that it’s an incredible story and he couldn’t wait to talk to me. He was loved so much and missed so much, grandmother had her pictures on his TV and Newell was always part of our lives,” said Oeland.

Newell is finally getting a proper burial. He is coming home soon, to hero’s welcome, and will be laid to rest in Arlington National Cemetery, with full honors.