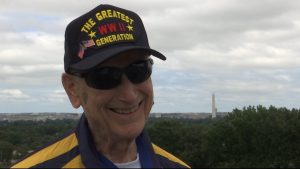 MEDFORD, Ore. — The family of a decorated World War II veteran is hoping people will honor his life with donations to some of his favorite charities.

Alan Axtell passed away this month at the age of 101. NBC5 News introduced you to “Al” during our exclusive coverage of The Southern Oregon Honor Flight in the fall of 2018. Axtell was the oldest veteran on the trip.

He was a combat pilot during WWII for the U.S. Air Force. He flew missions in Nazi-occupied Czechoslovakia and Austria, as well as Germany.

After the war, he met his wife Betty, and they enjoyed nearly 6 decades together and had 4 kids.

Al and Betty retired in Medford.

His family has asked in lieu of flowers, that donations are made to Court-Appointed Special Advocates or CASA and the Lion’s Eye Bank. You can read more about Axtell’s life HERE.