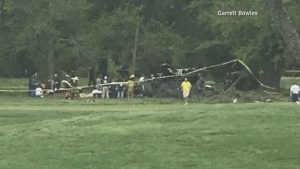 LEONARDTOWN, Md. – A crew member was killed after a military helicopter made a “hard landing” at a Maryland golf course.

Three crew members were on board at the time of the hard landing. At least one person was taken to the hospital.

There’s no word on the condition of the other two crew members.

Witnesses said the helicopter looks like it stalled before it came down, striking some trees in the process.

The Black Hawk is an Army utility chopper that’s often used in assaults and other missions.

The incident comes around two weeks after a military fighter jet crashed near Joint base Andrews in Maryland. That pilot was able to eject himself. Nobody on the ground was injured.