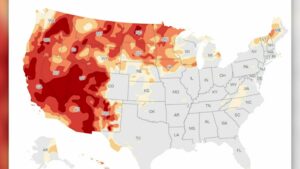 (CNN) – Drought conditions in the West are getting worse.

According to the latest U.S. Drought Monitor report released Thursday, more than two-thirds of Western U.S. is dealing with extreme or exceptional drought. That’s the highest level in recorded history.

27% of Washington State is now seeing extreme conditions. Just last week, the state had no exceptional drought on record.

Oregon reports its affected areas have nearly quadrupled this month to 17%.

More than 95% of the Western U.S. is under some type of drought.

Summer monsoon rains are expected to offer some relief in Arizona, New Mexico and parts of Colorado.