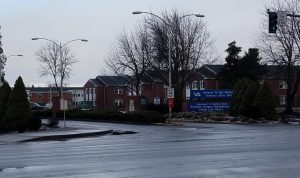 According to the Jackson County Sheriff’s Office, they were called to Oregon Rehabilitation Center & Clinics’ Building 201 after they received a report of a combative person in the admissions area at about 8:30 Thursday morning.

Police said an altercation ensued between the man and VA police officers. A shot was fired, injuring the man. No other injuries were reported.

According to VA administrators, the person shot was a veteran. Witnesses said he may have been at the VA to receive medical care. Witnesses also believed the veteran had a weapon, possibly a knife.

One person at the scene said VA police appeared to have used tasers and pepper spray on the veteran before the single shot was fired.

According to VA administrators, the veteran was taken to the hospital, his injuries appear to be nonlife-threatening. The VA facility was put on lockdown and appointments for the day were canceled.

Jackson County Sheriff’s Office will take the lead on the investigation. The name of the injured veteran, as well of the names of the involved officers, will not be released by investigators at this time.

NBC 5 News will update this story with new information as it becomes available.