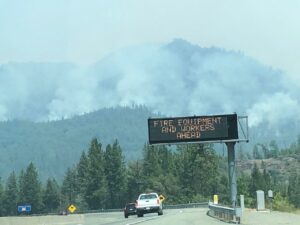 SHASTA LAKE, Calif. – A fire burning in the Shasta-Trinity National Forest near Interstate 5 doubled in size over the weekend.

On Wednesday afternoon, the Salt Fire was seen burning near Shasta Lake east of I-5 near the Salt Creek exit.

Evacuations were ordered in the area and I-5 was temporarily shut down due to the fire. It was reopened a couple of hours after the shutdown, but there were lane restrictions in effect until Friday morning.

Over 700 people are working on fighting the Salt Fire with more arriving soon.

Crews said the most active part of the fire was on the northwest corner, with the west and southwest sides continuing to hold. Additional lines were built on the east and southeast edges of the fire.

The Forest Service estimates over 40 structures have been destroyed, including 27 homes. The USFS is reportedly working with Shasta County to determine more information about damaged structures.

For the latest evacuation warnings and orders, visit https://inciweb.nwcg.gov/incident/7587/