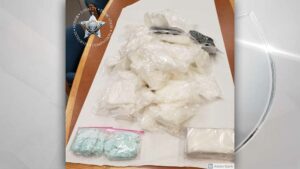 KLAMATH FALLS, Ore. – Two men were found with over 50 pounds of methamphetamine in Klamath County this past weekend.

Oregon State Police said on Saturday evening, a trooper pulled over a vehicle for a traffic violation on Highway 97 a few miles north of Klamath Falls.

According to OSP, the trooper saw signs of possible criminal activity and asked to search the vehicle. The consent search revealed about 55.1 pounds of meth, 2.2 pounds of cocaine, and over 1,000 suspected fentanyl pills.

The driver was identified as 36-year-old Daniel Ponce Gonzalez of Yakima, Washington. The passenger was identified as 20-year-old Benjamin Madrigal Birrueta of Madera, California. Both men were lodged in the Klamath County Jail for unlawful possession and delivery of methamphetamine and cocaine, among other charges.