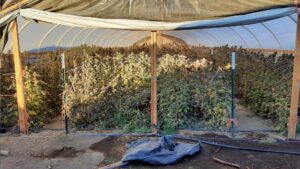 The City of Klamath Falls said on September 14, numerous law enforcement agencies teamed up to search what was reported to be a hemp growing operation near Philpott Lane in Bonanza.

According to police, the operation was watered by a new uninspected well which likely pumped thousands of gallons of water a day. The unlawful use of groundwater is being investigated.

Several people are facing the possibility of criminal charges in connection with the grow.