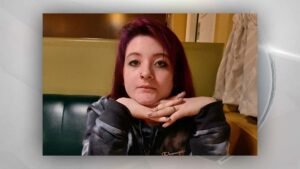 Original story: PORTLAND, Ore. – Child welfare workers are trying to find a missing teen believed to be in danger.

The Oregon Department of Human Services said 15-year-old Payton Brazell Smith is a foster child who went missing from Portland on March 22, 2021. She’s believed to be with two adults named David Jacobson and Tausha Hague. It’s possible she may be in a hotel near Northeast 97th Avenue and Northeast 102nd Avenue in Portland near the city’s border with Gresham.

Smith is described as 5’6” tall, 140 pounds with hazel/green eyes and brown hair that may be dyed purple, red, or other colors. She may be wearing nose rings and has a tattoo on her right inner arm that says “Hati.”

Anyone with information about Smith’s whereabouts is asked to call 9-1-1 or local law enforcement.