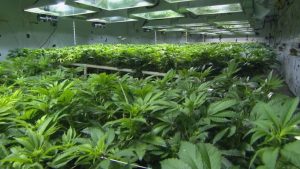 (NBC News) — This is a big year for marijuana.

A Gallup poll last October shows more than half the country, 58 percent, think marijuana should be legal, and on election day voters in nine states will decide if people can walk into a store to buy pot for personal use or get it as medicine.

Five states – Arizona, California, Nevada, Massachusetts and Maine – will decide whether to legalize marijuana for personal use.

Four others – Florida, Arkansas, North Dakota and Montana – may join half the country allowing marijuana for medical reasons.

With so many states potentially making it legal, many law enforcement officials are worried these votes could spark more illegal use.

“It might be passed along to children, or it might be more potent then originally believed,” say Jonathan Thompson, Executive Director of the National Sheriffs Association.

Those who support legalization say regulations will prevent illegal use.

“In all those states that have passed it, you do have quality control assurance, you have potency limitations, you have advertising limitations,” says the Marijuana Policy Project’s Morgan Fox.

There is growing evidence that as marijuana is legalized more people use it.