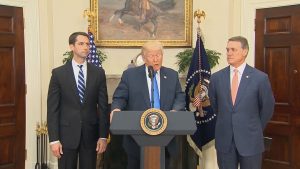 Washington, D.C. (NBCNC) – President Trump announced his support for legislation that would cut in half the number of immigrants allowed into America while shifting to a “merit-based” system of entry.

The bill would scrap the current lottery system for being admitted into the US and instead institute a points-based system for earning a Green Card.

And the president made clear he wants new immigrants to have the ability to support themselves.

The bill’s co-sponsors joined Pres. Trump and said their proposal is modeled on systems already in place in Canada and Australia.

“As a candidate I campaigned on creating a merit based immigration system that protects US workers and taxpayers and that is why we are here today,” Pres. Trump said.

Other pro-immigration Republicans like Jeb Bush have suggested similar changes for immigration criteria without a reduction in overall immigration.