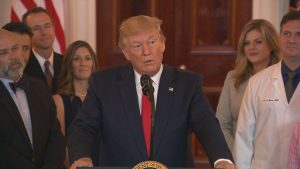 (NBC News)  The impeachment trial of President Donald J. Trump came to an end Wednesday, with the Senate voting to acquit on two articles: abuse of power and obstruction of Congress.

While the president’s acquittal was almost certain, the vote was not without drama.

Republican Senator Mitt Romney crossed party lines, voting to convict in what he called “the hardest decision” of his life.

“Corrupting an election to keep oneself in office is perhaps the most abusive and destructive violation of one’s oath of office that I can imagine,” Romney said. The move gives Democrats a bipartisan talking point, though it doesn’t change the outcome.  President Trump will remain in office with overwhelming support from his party.