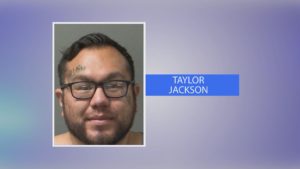 29 year old Taylor Reed Jackson hit the car several times, but none of the shots hit the woman – according to police.

It happened Sunday afternoon in front of a market on East Main Street.

Jackson was treated at Sky Lakes Medical Center, and later jailed on multiple charges including being a felon in possession of a weapon.