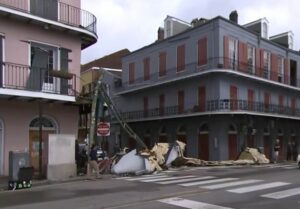 The hurricane is said to be one of the strongest to make landfall in the region, killing at least one person outside of Baton Rouge. Forecasters predict Ida, now a tropical storm, will continue to produce heavy rainfall through Tuesday morning across the gulf coast.

As of Monday afternoon, the damage was still be assessed by officials. 53 million people remain under flood alerts across the eastern half of the United States. The storm knocked out power to virtually all of New Orleans. NBC reports it could take weeks to restore the outages, after all eight electric transmission lines feeding the city lost service.

FEMA is ready to move in to help those hit by Hurricane Ida. Trucks carrying water, meals, tarps and generators are on standby at Maxwell Air Force Base in Montgomery, Alabama. They are all set to move out as soon as the storm clears.