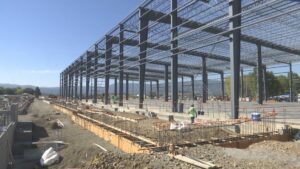 MEDFORD, Ore. —The largest building the city of Medford has ever taken on, is getting closer to becoming a reality.

Plans for the facility include an event center, indoor and outdoor swimming pools, a splash pad, sports courts, and more.

Since its groundbreaking last September, it’s finished underground prep work for the foundation, framing of the pool area, and the structural engineering of the event center.

“It is going to impact everyone who lives here in the valley in some way shape or form whether they are business owners and there’s more business coming to town because of this being here, or you’re a resident with children or that you participate in recreational activities,” said Medford Parks & Rec Director, Rich Rosenthal.

He says he’s pleased with the progress so far.

He estimates the facility will open in late fall of next year.