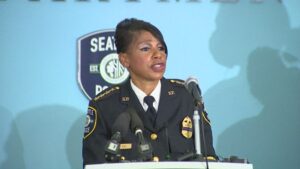 The spending cuts come amidst months of protest in Seattle over the police killing of George Floyd in Minneapolis.

Best says she was not included in any city council conversations dealing with budget cuts to the police department.

Best has been with the Seattle Police Department for 28 years. She was the first Black police chief in Seattle’s history.