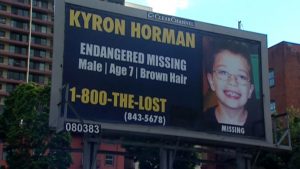 Portland, Ore. (KGW) – Officials have confirmed a search carried out Sunday in Portland, Oregon’s West Hills was related to the investigation into the disappearance of Kyron Horman.

Horman disappeared from Skyline School in Northwest Portland on June 4, 2010. Local police, the FBI and hundreds of volunteers scoured the wooded areas around Kyron’s home and his school, but he was never found. He was 7 years old at the time of his disappearance.

No arrests have been made in the case.

Volunteers with the search and rescue team combed through thick brush Sunday along Northwest Springville Road.

Multnomah County Sheriff’s Office Lt. Chad Gaidos said there was nothing to update after Sunday’s search.

“Yesterday’s search yielded a number of items, but none appear to be related to the case,” Gaidos said.