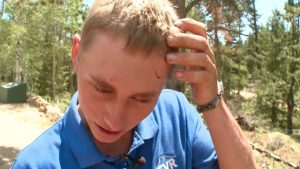 Boulder County, Colo. (KUSA) – Colorado Parks and Wildlife is tracking down a bear that attacked a 19-year-old man early Sunday morning at a campground in Boulder County.

The sheriff there says the incident happened around 4:15 a.m. at Glacier View Ranch, a religious retreat and camp west of Jamestown.

“There’s four spots where its claws dug into me,” said Dylan, the 19-year-old who was attacked as he gestured towards his head. “And then it pulled me into its mouth and then it grabbed me with its teeth right back here, and when it pulled it tore the skin and scraped along my skull which was like the cracking noise that I heard.”

CPW says the bear attacked unprovoked meaning there wasn’t open food or scented clothing in Dylan’s vicinity. He was sleeping outside in a teepee along with four other counselors at the time.

“I thought I was dreaming for a second and then I thought this hurts too bad to be dreaming,” Dylan said.

CPW made finding the bear a top priority for the agency, which sent out bloodhounds to help. There have been bear sightings in the area, but it’s unclear if this was the same animal involved in the attack.

“We need to chase these animals off. They need to have a healthy natural fear of people,” said CPW spokeswoman Jen Churchill. “This is really a bear that could be a continual threat to people in this community.”

Camping will resume as normal at Glacier View Ranch. The last human death from a bear attack was in 2009.