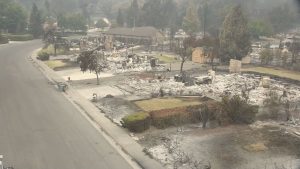 SISKIYOU COUNTY, Calif. – After one of their deputies lost three relatives in the Carr Fire, the Siskiyou County Sheriff’s Office is working to help collect donations for other victims of the Carr Fire in Shasta County.

Sheriff Jon Lopey said in part, “Our grieving deputy and his family have suffered a great loss in the Carr Fire and it is very commendable that he and his co-workers at the Siskiyou County Sheriff’s Office, all of whom have volunteered their own time to participate in this charitable project, are taking on this very worthy undertaking to help others in need.”

SCSO said while they prefer unopened packages of products, any donations will be accepted. Items collected will be given to the non-profit relief organization Pedro GTP Relief for further distribution to Carr Fire victims.

Donations can be delivered to the Life Foursquare Church located at 900 North Street in Yreka from Monday, August 6 through Wednesday, August 8.