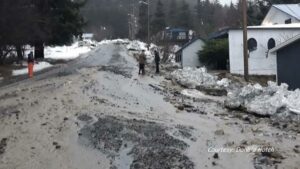 HAINES, Alaska (KTUU) — Dozens of people in Haines, Alaska are being evacuated and six people are unaccounted for after landslides on Wednesday, according to the mayor.

There have been small landslides impacting individuals’ homes, according to Olerud, and Wednesday afternoon, a larger landslide went through a neighborhood where the city is working to evacuate 30 residents.

“In our harbor, as you go to the south, southeast of town, there’s a road extending along the harbor in the bay that goes out to Battery Point Trail, and there’s some relatively steep terrain up above it … The slide that came down, they’re estimating is about 600 feet wide, and so there was people trapped on the other side of the slide,” said Olerud.