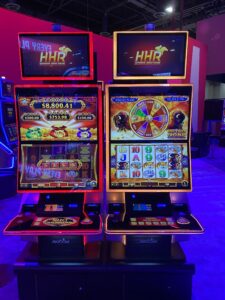 This is not a new request. In a letter to Governor Brown, Senate President Courtney, Senator Girod, Speaker Kotek, and Representative Drazan, the tribes say it’s been 25 years since the last comprehensive review of state gaming.

The man behind Dutch Bros and the Grants Pass Downs, Travis Boersma has big plans to add an entertainment center in Josephine County. But local tribes are asking for a state review of gambling practices before the entertainment center, called the Flying Lark, installs 250 Historic Horse Racing (HHR) machines.

“The HHR machines that are available now, are very different from the ones Portland put in. They are more like slot machines, they have the brands and titles of standard slot machines,” said Bob Whelan, a project director at ECONorthwest, who was commissioned by the tribes to evaluate the impacts of machines like HHRs.

A few weeks ago, the President of the Flying Lark, Michael Thiessen described the business like this: “We’re gonna be the epicenter for horse racing in Oregon. We will effectively move that from Portland down to Grants Pass-Medford area. It’s gonna change horse racing forever.” 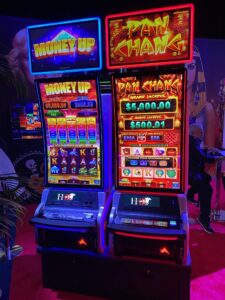 In the letter sent Wednesday, the tribes say since the last gaming review in the 1990s, technology has evolved dramatically. “The new HHR machines keep about 6-7 percent of every dollar bet, they have the titles you would expect, its really advanced dramatically due to some new technologies,” said Whelan. The Oregon Racing Commission says these HHR machines aren’t technically slot machines because they use peri-mutuel wagering, which means people bet in a pool rather than against the house.

“There are distinctions between peri-mutuel wagering and random number generators which are what slot machines work on,” said Jack McGrail, the executive director for the Oregon Racing Commission. According to developers, they look like “traditional games” but function as though you placed a wager at an off track betting site on a horse race in the past.

“It’s not peri-mutuel betting because you’re not really betting against the other players on an individual race,” said Whelan.

The tribes make a point in their letter to say they support economic development in rural Oregon. But in a study they commissioned, it found both the tribes and the Oregon lottery would lose millions of dollars if the historic horse racing machines were installed at the Flying Lark. Whelan’s study found the tribes would lose 6 million dollars of gross income and the lottery would lose 13 million dollars in the first year of the HHRs at the Flying Lark. 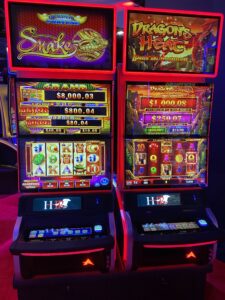 For now, the Oregon Racing Commission is reviewing the Grants Pass Downs application to authorize HHR machines at the facility. The executive director says ultimately the decision to approve or deny the application is up to the board. “This is not a new product and this is not a new regulatory venue for us and we’ve done this before without problems and we’re able and confident to do it again,” said McGrail.

In a statement, Thiessen said, “The Flying Lark entertainment venue will be a great addition to Southern Oregon.  We believe The Lark will economically and socially enhance the community in which we live, work and play.”

Another study referenced can be found here: Examination of HHRs 2021

In a separate statement we received, McGrail said, “TMB Racing, LLC dba Grants Pass Downs has submitted paperwork requesting authorization to conduct HHR at the facility. The Flying Lark is the name of the venue. Statute requires ORC approval to conduct this form of pari-mutuel wagering and it is restricted to the premises of the race track and cannot be offered at the OTB’s [off track betting sites]. We will conduct a careful and considered review of the application before making any recommendation to the board. Ultimately the decision to approve or deny the application is within the purview of the commission and not a decision made by the executive director though I assume the staff recommendation would carry some weight.”