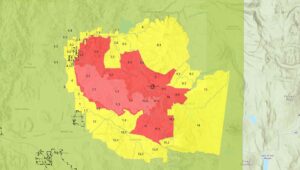 A map of current evacuation levels is available HERE.

In the days after the fire started, dense smoke in the Rogue Valley prevented heavy air attacks on the fire. However, a cold front coming in from the west Thursday night pushed some of the smoke out, allowing for firefighting aircraft to operate Friday.

With favorable weather conditions, firefighters will continue to mop up hot spots within the burned areas and reinforce containment lines already established around the South Obenchain Fire.

As of the morning of September 18, the fire was 35% contained. Butte Falls was still evacuated.

For the latest information, visit http://www.facebook.com/SouthObenchainFire