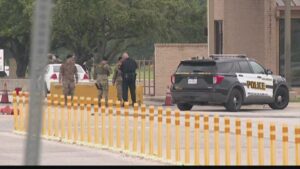 SAN ANTONIO, Texas (WOAI/NBC) – An Air Force base in San Antonio was placed on lockdown for about an hour after military officials said gunfire was reported near a gate to the base.

Air Force officials said two gunshots were heard Wednesday coming from outside Joint Base San Antonio-Lackland onto the base.

Officials said the shots were reportedly fired near the Valley Hi gate on the western side of the main base, just east of Interstate 410 and near a shopping center.

Investigators are trying to determine whether the gunfire report was a false alarm. It’s also unclear if anyone saw a shooter.

When asked if they overreacted, an official said the report of gunfire was “solid.”

“There’s a lot of facilities on this installation that are very important to the Air Force and we have to take every report seriously,” said Lieutenant Colonel Brian Loveless. “NOW i would rather overreact to something than underreact and get it right. We can triage whether or not we responded appropriately later on, but as of right now I am 100 percent confident we made the appropriate response and made all the right calls along the way.”

No injuries were reported.

The lockdown has since been lifted and all gates on the base have reopened.