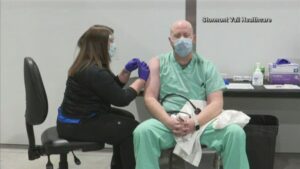 (NBC) – July 4th is just around the corner and it’s the president’s target date for 70% of Americans to have at least one COVID vaccine shot. That’s the president’s aspirations. Right now, we are just a tick under 61% and climbing.

It comes at the same time as the Pfizer CEO and Dr. Anthony Fauci are preparing for the possibility of a third booster shot being needed within a year. Pfizer is currently studying the efficacy right now of the third shot.

The science should become clear in the next couple of months, but the company does expect a booster shot needed within 8 to 12 months of the first shot, which means if you’re a frontline worker back in December, you could be looking at a timeframe of September of this year for your third shot.

As far as what the current vaccines are doing, they have injected life into the economy. In Miami, Florida, for example, many of the restaurant tables were filled in the middle of the week. That as Miami, according to OpenTable, has seen an increase of more than 50% of seated diners since this time frame of 2019 pre-pandemic.

Other major metros that have been under tighter restrictions for longer periods of time, like New York and Seattle for example, are still down about 60 or 70%, but overall the trend is going up.

According to the company Yelp, they’ve seen an increase of reservations or requests for waiting lists either online or on their mobile site by 46% compared to where we were a couple of years ago, and that is nationally.