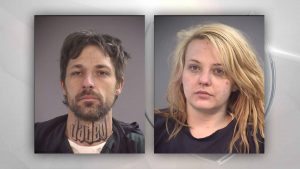 The Jackson County Sheriff’s Office explained Tallman was wanted for a parole violation and is a suspect in multiple criminal investigations, including burglary, eluding and reckless driving in the Shady Cove area.

During the surveillance period, members of the task force spotted Tallman firing a gun. That’s when a SWAT team and Oregon State Police were called in for backup.

By 4:30 p.m., law enforcement officers contacted Tallman in the 100 block of Butte Falls Highway. The sheriff’s office said Tallman ran toward Highway 62 and evaded capture for about 12 minutes before he was arrested.

Moments before the arrest, a woman who was with him was also taken into custody. She was identified as Cheyanne Michael Colman of Shady Cove. She was arrested for warrants related to a theft case.

Deputies said Tallman and Colman may face additional charges as the investigation continues.