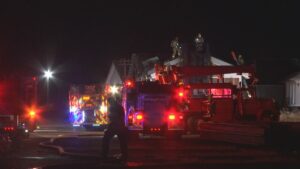 4 engines and 2 battalion chiefs were on the scene.

“We do have a fire inspector here who’s looking and trying to figure out the cause of the fire, and they’re going to figure out who owns the property and contact them,” said Medford Battalion Chief, Kip Gray.

Gray says the fire began burning outside of the structure before moving towards it.

He says he’s unsure if the structure is a loss or not, since it seems it was already abandoned and unused.