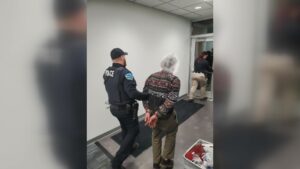 Detectives with GPPD, Josephine County Sheriff’s, and Rogue Area Drug Enforcement Team (RADE), executed a search warrant on the 5900 block of Williams Highway on Wednesday. Police say the warrant was the result of an investigation into allegations of sexual assault of an animal.

The case remains under investigation, and anyone with information is asked to contact: Det. Lohrfink – 541-450-6260