MEDFORD, Ore — Local restaurant owners are expressing their frustration as Jackson county begins to fall back into extreme risk.

Hawaiian Hut located off of Riverside Ave in Medford, shared the photo of their new warning sign on social media Wednesday.

The no trespassing notice is targeted only towards government agents – stating that its a private establishment and officials need a warrant. It further notes, “any attempt to violate this will result in law enforcement being summoned.” 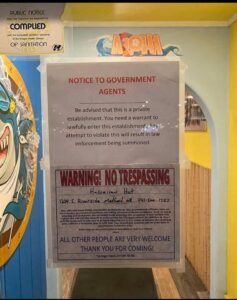 Earlier this week, Governor Kate Brown announced that 15 counties including Jackson, Josephine and Klamath would be going back to extreme risk. In the Facebook post, the owner pushed for the community to stand up against the new restrictions.

The move prohibits restaurants like Hawaiian Hut to have indoor dining and to only open for take-out.

“For over a year now I have complied with every lockdown, mask mandate and everything [Governor Brown] has asked for us businesses to do to comply with covid-19,” The owner said in the post. “But this is tyranny…myself and other businesses will no longer comply.”

Oregon’s Occupational Safety and Health Administration told NBC5 earlier in the week that it will continue to enforce penalties against businesses that defy state orders. Its seen several similar cases like Casey’s restaurant in Klamath Falls, that ultimately resulted in multiple fines.

“We can issue larger fines, but the overarching goal is to get the employer to change their behavior,” OSHA spokesperson Aaron Corvin said earlier this week. “We try to get them on a path where they need to be.”

Hawaiian Hut did not immediately respond to our request for comment.